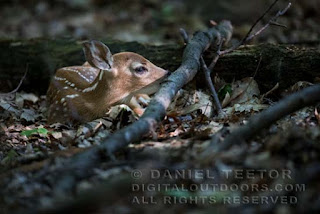 This fawn whitetail deer is only a few days old.  I saw it walking with its mother in the distance until it became tired.  It took about an hour to find it because it was so difficult to see after it laid down.  The fawn was initially in deep shadow and there wasn't much of a picture.  But after some time a sunbeam tracked in through the overhead canopy and lit the head.
400mm lens on a monopod, 1/320 second at f/2.8, ISO 2000.
Posted by Daniel Teetor at 2:49 PM