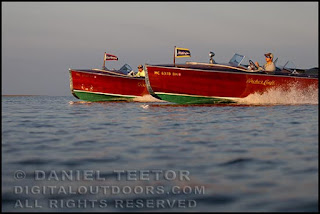 These two antique, wood speedboats were recently photographed running together on Lake St. Clair.  This photo shoot was planned for the early morning both for the low sun angle and for the lack of other boat traffic.  The low sun shows helps show the rich, mahogany wood of these old boats.

The drivers crossed in front of the camera while turning slightly.  This allowed part of the decks to be visible.  The camera lens was just a few inches above the water so it would have been difficult to see the decks if the boats were running perfectly level.  The location was chosen both for the uncluttered background and for the relatively shallow water.  100-400 lens at 100mm, f5.6 at 1/1250 second, ISO 400.
Posted by Daniel Teetor at 4:37 PM No comments: