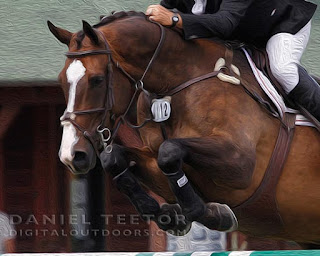 This equestrian sports art was created from a photograph taken during a grand prix jumping event at a horse show.  The original photograph included the entire horse and rider, the fence, plus some of the background.  It was very nice on its own with the horse captured at the peak of the jump and showing good form.  For this artwork we tightly cropped the image to focus attention on the front of the horse as it pulls up its legs to clear the jump.  The rider had to be generic so we intentionally excluded the face.  A digital effect was selectively applied that gave the appearance somewhat of a painting, with simulated brush strokes and the elimination of crisp detail.
Posted by Daniel Teetor at 10:01 AM No comments:

Buck During the Rut 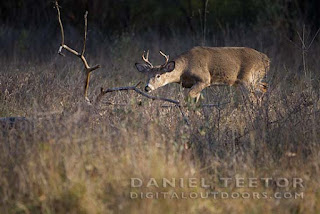 This buck whitetail deer was following the scent of a doe during the rut.  The buck is not a large one but we were happy to catch this pose.  During the short breeding season the bucks are relentlessly on the move looking for does.  We were positioned at the edge of a meadow with many buck rubs and active scrapes hoping to see some action.  This classic, sneaking buck came by shortly after sunrise.  The woods beyond the deer are still very dark and this helps the buck stand out so well.  The low morning sun lights up the antlers against the background.
200mm lens, 1/1250 second at f/2.8, ISO 250.  We could have used a lower ISO but a few minutes earlier we had been getting some photos of does before the sun popped out.  The buck appeared suddenly and there was no time to change.
Posted by Daniel Teetor at 10:12 AM No comments: