Portrait on a Chairlift 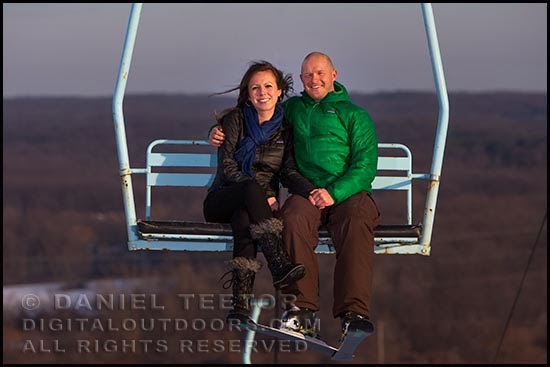 This portrait of a couple was set up on a chairlift at a ski resort.  The couple chose the setting to fit the skiing theme of their upcoming wedding.  A lift was chosen at the slope farthest from the lodge so that there wouldn't be many other skiers riding.  This allowed the lift operator to slow the lift and give us more time to shoot.
We shot in the late afternoon with a low sun.  The temperature was quite mild and this allowed the couple to be comfortable without heavy clothing.  I had two assistants holding speedlites that were mounted on monopods.  We were standing on a steep slope and with the monopods extended the lights could give some fill on the shadow side.  We did two runs on the chairlift and got 6 shots on each pass.  I used the 70-200 lens so I could zoom as the chairlift approached.  This frame was shot at 148mm.
The overhead cable that supports the chair ran from the top of the frame to the heads of the couple.  It was out of focus but still appeared to be a distraction so I removed it in post-production.
Posted by Daniel Teetor at 8:56 AM No comments: 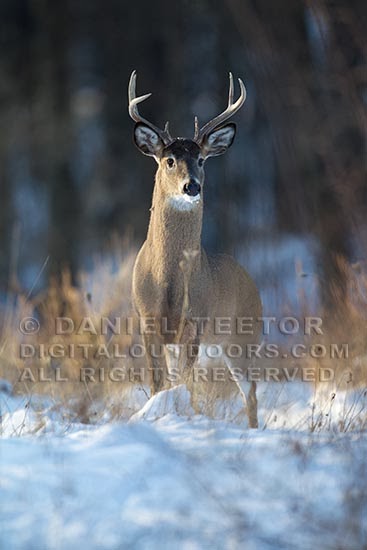 This buck whitetail deer stepped out of the woods behind him into a snow-covered meadow.  His attention was focused on some does that were feeding nearby.  I was struck by the sunlight gleaming off his antlers because the dark woods in the background made them stand out so much.  I quickly shot a couple of frames and then rotated the camera to the vertical position for this portrait.
400mm lens, 1/1250 second at f/2.8, ISO 500.
Posted by Daniel Teetor at 9:55 AM No comments:

A selection of boating video clips have been added to our sales site and can be downloaded for commercial use.  These clips include high-speed action of two wooden speedboats running side by side as well as other footage of the boats taken from dramatic angles.  We are primarily still photographers but often include video clips in our projects.  This nautical video was taken during one of our photo shoots and some of the more interesting clips are available here:
Video clips of antique, wooden boats at speed.
Posted by Daniel Teetor at 8:27 AM No comments: