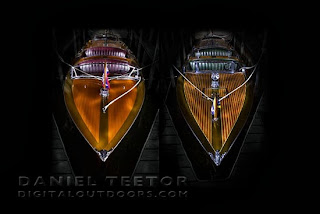 This image of two antique, wooden speedboats was an experiment with the "painting with light" technique.  Each boat was photographed separately at night in a dark boathouse and composited later to make one image.  The camera was mounted on a tripod and the shutter held open for 30 seconds.  During the exposure I "painted" light onto the decks with a handheld flashlight.  Some light spilled onto  the docks so I had to darken those parts in the post-production work.  The boats were floating and this allowed for some slight movement during the 30 seconds.  From the many exposures that were made I was able to select a couple that had no perceptible movement.  24mm lens at f/8 for all.  ISO was 200 for some and 320 for others.
The boat on the left is a 1936 Gar Wood triple-cockpit runabout and the other boat is a 1930 HackerCraft triple-cockpit runabout.
Posted by Daniel Teetor at 12:45 PM No comments:

We created a short multimedia production featuring a few of our nautical photographs and video of boating action.  Wooden boats are the focus and everything was shot on Lake St. Clair and the St. Clair River in Michigan.
Watch it on YouTube
Daniel Teetor Speedboat Photography

Full screen viewing is suggested along with good volume.


Posted by Daniel Teetor at 9:37 AM No comments: