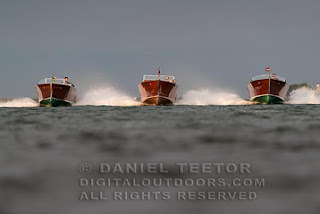 Three antique, wood speedboats running together in formation.  This exciting shot was set up in Lake St. Clair shortly after dawn.  The driving was tricky but the approaching boats are pretty much evenly spaced and running at the same speed.  This was shortly after dawn and a little sun was shining to put nice light on the boats.  The color of the water remains a mystery because normally it looks like, well, water.  We're not sure why it's so dark.  The sky was quite dark overhead even though at the horizon there was some sun so perhaps the water was reflecting the overhead sky.  Anyway, it makes for striking contrast with the white spray from the boats.  Our camera was on a tripod in shallow water.
100-400 lens at 400mm, 1/1000 second at f/5.6, ISO 800.
Posted by Daniel Teetor at 9:05 AM