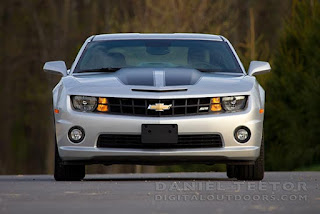 We were fortunate to recently photograph this Chevrolet Camaro SS and this was one of our "must-have" shots.  The location was previously scouted because we needed a road with little traffic, a background with little clutter and a slight hill.  This last requirement allowed us to get the camera low enough to see the road drop away behind and underneath the car.
The sun was to the camera's right and very low, partially hidden by light clouds.  This gave us soft lighting with no harsh reflections.  We tried turning on the headlights but at this low angle the the lights were too intense.  The parking lights were left on and they add a subtle accent.
We chose the 400mm lens to give us some compression of the car and to blur the background.  1/400 second at f/5.6, ISO 320.
Posted by Daniel Teetor at 10:07 AM No comments: 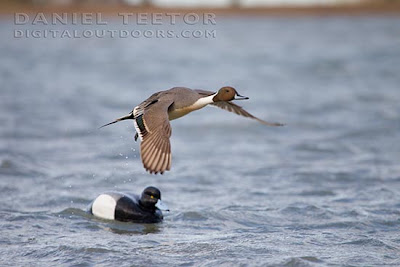 A drake Northern Pintail duck flying over a bluebill decoy. We put out a couple dozen bluebill decoys in hopes of getting some action photos of bluebill ducks (scaup), as well as other diving ducks such as canvasbacks and redheads during the spring migration through the St. Clair Flats. The northerly wind was about 20 knots steady, gusting to 30 knots. This single pintail flew downwind from behind us, banked and pitched in to the decoys. It happened too quickly to get the focus locked on him before he landed. This shot was taken right after he took off into the wind and drops of water can be seen under his feet.
This is quite a nice image and the decoy adds some interest. It would have been nice to have some morning sunlight highlighting the plumage, though. The forecast called for a sunny morning but it turned out mostly cloudy. Shocking; the forecasting is always so reliable.
100-400 lens at 400mm, 1/1250 sec at f/5.6, ISO 640.
Posted by Daniel Teetor at 1:26 PM No comments: