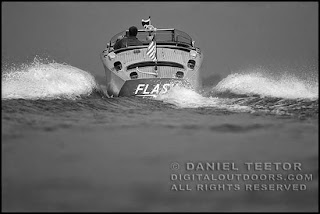 This black and white picture of an antique, wood speedboat was originally taken in color.  The boat is a triple cockpit Hackercraft runabout and was photographed as it was driving directly away from the camera.
The photograph lends itself to the monochrome conversion because of the dramatic contrast between the dark water and the bright spray.  The sky, too, is relatively dark while the boat consists of the middle tones.  We used the channel mixer to make the adjustments with some additional subtle dodging of the spray and the roostertail to make them a little brighter.
Posted by Daniel Teetor at 8:18 AM No comments: