We recently produced this short video featuring two antique, wooden speedboats.  It's Volume II, following a similar one we produced last year with the same boats.  The photos and video footage were taken in July and August of this year.

The still photos were taken by me.  The video footage was taken by dedicated staff and includes GoPro camera work, both mounted and handheld.  A second handheld video camera was also used.  Our apologies for the handheld parts that appear shaky.  We rarely had calm water and the chase boat was bouncing.  Also, due to being understaffed on some days, I was sometimes driving the chase boat myself, not taking photographs but allowing staff to use the video cameras.

Posted by Daniel Teetor at 8:04 AM No comments: 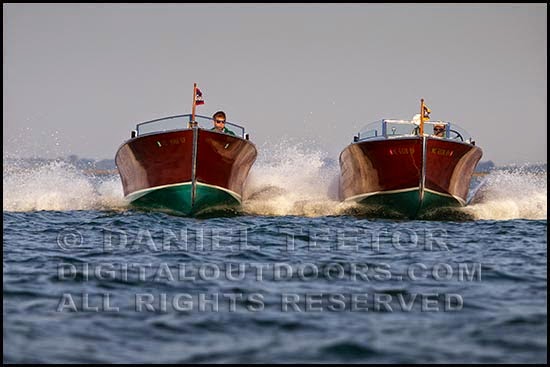 These two antique, wooden speedboats were photographed recently on Lake St. Clair as they ran together in close formation.  We wanted the drivers to get as close as possible but the driving was very tricky in the choppy water.  This shot looks very nice with the bright spray showing well against the dark water.  The lake was too deep for me to stand so I was positioned on the swim platform of a chase boat that was pointed into the sun.
The boat on our left is a Gar Wood runabout and the boat on our right is a HackerCraft runabout.
100-400 lens at 250mm, 1/1250 second at f/5.6, ISO 250.
Posted by Daniel Teetor at 1:21 PM No comments: