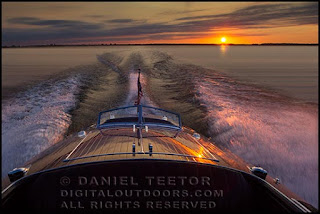 We woke early in the morning to photograph an antique, wooden speedboat at sunrise.  The boat is a 28 foot, Gar Wood triple-cockpit runabout.  The long deck, the spray and the wake help lead the eye to the distant horizon and the rising sun.  Its difficult to decide on the best exposure for a photograph like this.  Getting detail in the boat means the sun and sky will be overexposed.  We decided to underexpose slightly and make some adjustments later when processing the raw image:  The sky was darkened slightly and the boat and spray were lightened.  The original exposure was 1/100 second at f10.0, ISO 100.  24-70 lens at 24mm.
Posted by Daniel Teetor at 8:40 PM No comments: 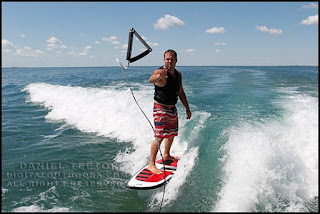 This is a cool photo of a man wakesurfing on a large boat wake.  We timed the photo to capture the tow rope in the air as the surfer tosses it back to the boat.  He no longer needs to hold the rope as the wake allows him to surf on his own.  Several other attempts to capture the rope in the air were not as successful because the handle either partially obscured the surfer or was only partially in the frame.  This one worked well.
24-70mm lens at 24mm, 1/1000 second at f 5.0, ISO 100.
Posted by Daniel Teetor at 8:14 AM No comments: