Snow Ski Racer in a Blizzard 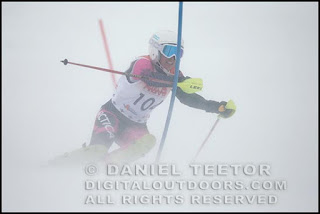 This photo of a snow skier at a gate during a slalom race is unusual.  The wind was blowing steadily at about 35mph with occasional gusts to 50mph.  This shot was taken during one of those wicked gusts.  The wind was knocking the camera off target and knocking me almost off my feet.  The skier likely had it worse as she couldn't see very far down the course.  Another challenge was the constantly changing light levels that forced me to continually change the exposure settings.  This race was during the state finals and had it not been such an important race it likely would have been rescheduled.
400mm lens, 1/2000 second at f/3.5, ISO 320.
Posted by Daniel Teetor at 7:23 PM No comments: