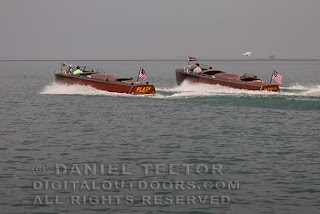 Two antique, wood speedboats running side by side on Lake St. Clair and followed by a quadcopter drone.  We recently directed a photo shoot that included still photographs along with video footage taken by the camera on the drone.  In this photograph the quadcopter is visible above the boat on the right side.  The drone pilot got some exciting video by flying in front of the moving boats as well as the overhead and following views.  The wooden runabouts are a HackerCraft on the left and a Gar Wood on the right.  A chase boat was used as a platform for both the still photos and the quadcopter pilot.
Here is a short movie trailer that features a small amount of this video footage.  We'll be producing a longer film later this year.

Posted by Daniel Teetor at 8:58 AM No comments: