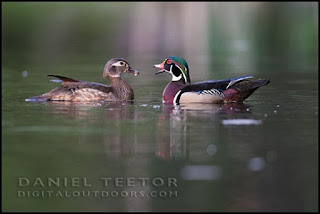 This pair of wood ducks was photographed from a blind at the edge of a pond.  The two had been swimming for a few minutes in range of my camera and I took a handful of photos (the previous blog post shows one of the first).  As I watched, the two ducks turned toward each other and appeared as though they were conversing as humans; the drake talking to a listening hen.  The pose only lasted an instant before the drake started nipping at the hen as some sort of courtship ritual.
400mm lens, 1/800 second at f/2.8, ISO 2000.
Posted by Daniel Teetor at 1:57 PM No comments: 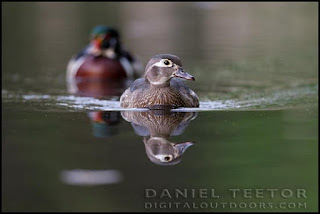 Here is a hen wood duck swimming directly toward me with a drake following behind.  This photograph was taken at a small pond in an area with several man-made nesting boxes that the wood ducks were using.  My blind was built as close to the water as possible and I was lying on my belly with the camera lens resting on a log.  This low angle is dramatic.  This shot was taken just about sunrise but the sun wasn't high enough yet to shine through the trees at the perimeter of the pond.  The light is diffused and even.  Even though the hen is drab colored she still contrasts nicely with the darker water.  Especially her reflection.
400mm lens, 1/800 second at f/2.8, ISO 2000.
Posted by Daniel Teetor at 12:21 PM No comments: 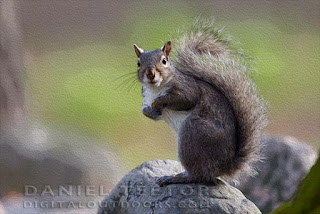 We've created some new artwork and this gray squirrel image is an example.  We start with an original photograph and add some digital enhancement.  The resulting image is still photorealistic but it looks very nice on wrapped canvas prints.  The gallery is here:
http://www.zazzle.com/dsteetor/gifts?cg=196662314223135282
So far there are images of both gray and fox squirrels, whitetail deer, mallard ducks, wood ducks and golden retriever puppies.
Posted by Daniel Teetor at 8:56 AM No comments: 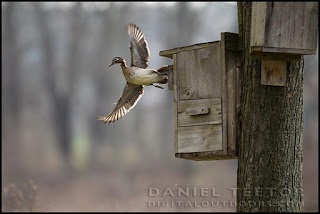 This is a hen wood duck flying from her nesting box.  I was positioned in a ground blind that was close enough to photograph three nesting boxes and capture any activity.  Wood ducks are fast fliers and it is difficult to get shots of them in flight.  They seem to hardly slow their speed at all when entering the box and the exit is equally quick.  Fortunately, the hens give some warning before exiting by showing their heads at the opening.  Sometimes they wait several minutes but when they decide to leave they are gone in a flash.  That was the case here and I kept the camera trained on the box as soon as I noticed her head protruding from the opening.  The shutter speed is not particularly fast and there is some attractive blurring at the wing tips.
400mm lens, 1/800 second at f/3.2, ISO 320.
Posted by Daniel Teetor at 9:23 AM No comments: